How to calculate square footage of a room

Calculating the square footage of a room requires some very basic geometry. You’ll need to calculate the area of each room in your house — be sure to only include rooms that count toward your gross living area (GLA) — and add them together.

Before you start measuring, make sure you have the following tools on hand:

Draw a rough sketch of the floor plan for your house. Don’t worry about being accurate. You just need something to help you keep track of all the rooms you’re measuring.

👷 Pro tip! Don’t forget to include closets, pantries, and other small rooms in your plan. They can be easily overlooked, but they usually count toward your total square footage.

Next, start measuring! You’ll use different formulas depending on whether a room is a:

Chances are most if not all of the rooms in your house are rectangular. That’s good news, since the area of a rectangle is easy to calculate. All you do is multiply length by width. Or, to put it another way, multiply the length of the longest wall by the length of the shortest wall.

As your geometry teacher would write it:

Where A equals area in square feet, L equals length in feet and W equals width in feet.

Let’s take the following room as an example: 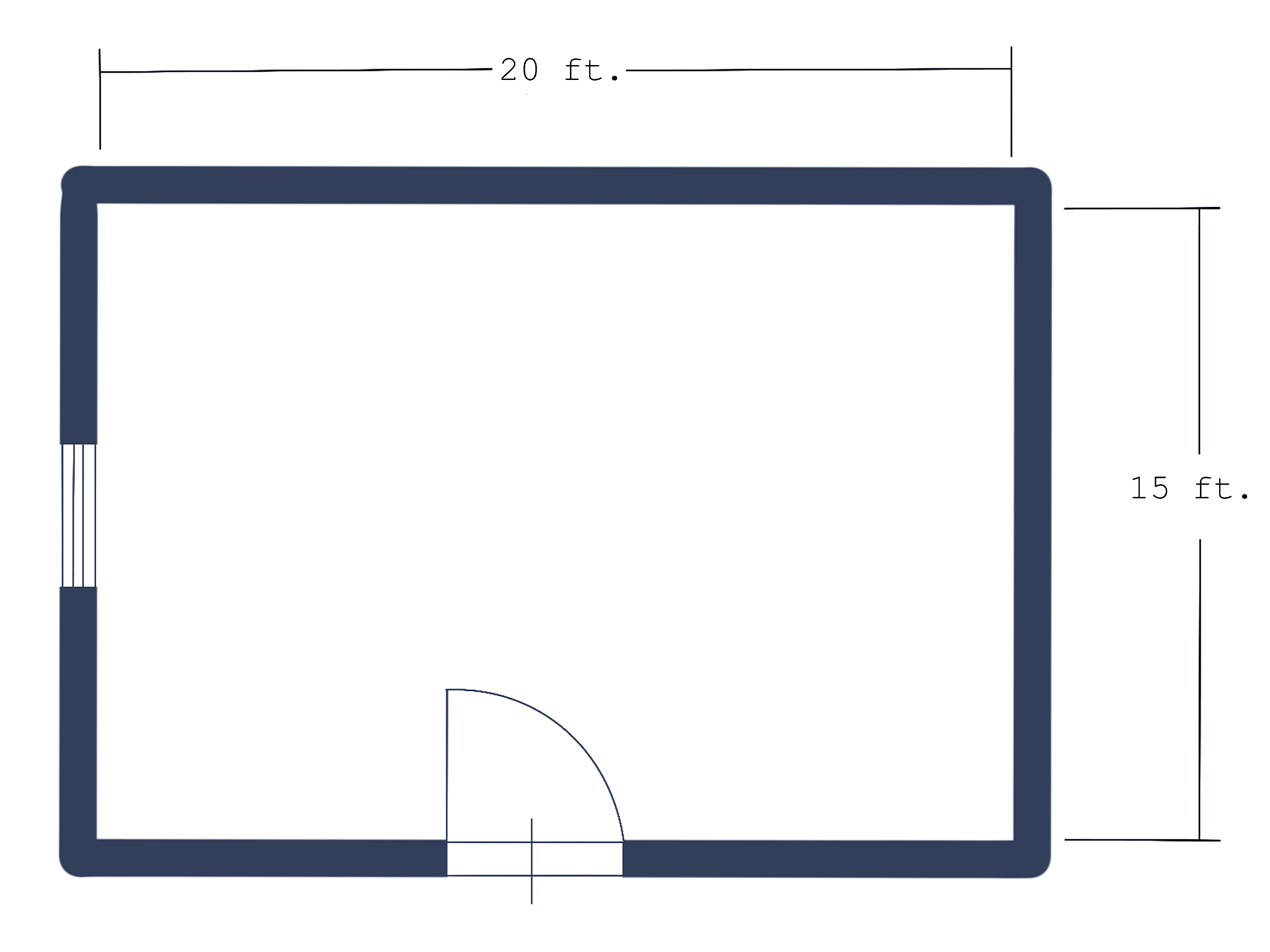 💁 What about alcoves and oddly shaped rooms? If you have a room with alcoves, fear not! Simply measure the area of the alcove using the same equation as above (assuming it’s a square or rectangle). Then, add the total to the area of the main room. If you have an oddly shaped room, such as an L-shape, split it into square or rectangular sections and treat them as two separate areas. Not every space is linear, but you can still determine the square footage of an area by dividing it into shapes and calculating each shape's individual area.

Triangular rooms may sound strange, but they do happen. You may for example, have a corner of a room that has been turned into a closet or pantry.

Fortunately, finding the area of a triangle is very easy. Multiply the length of one side by the height of the triangle and then divide the answer by two.

That might sound tricky, but it’s actually really simple. The following example will show why.

The first step is to measure one side of the triangle. This side will be your base. In the above image, the base is four feet.

We then imagine a perpendicular line traveling from the base to the opposite corner of the triangle. In the above picture, this is the dotted line, which is your base height. In our example, the base height is 3.5 feet

Then we multiply the base by the base height, which gives us 14.

Finally, we divide our answer by two. For our tiny room above, the final answer is 7 square feet.

Calculating the square footage of a circular room is a bit more complicated, but it’s still quite easy. If your room is a perfect circle, you can calculate the area by multiplying pi (which is approximately 3.14) by the radius of the room squared.

Still confused? Let’s take an actual example and you’ll see how simple it is! 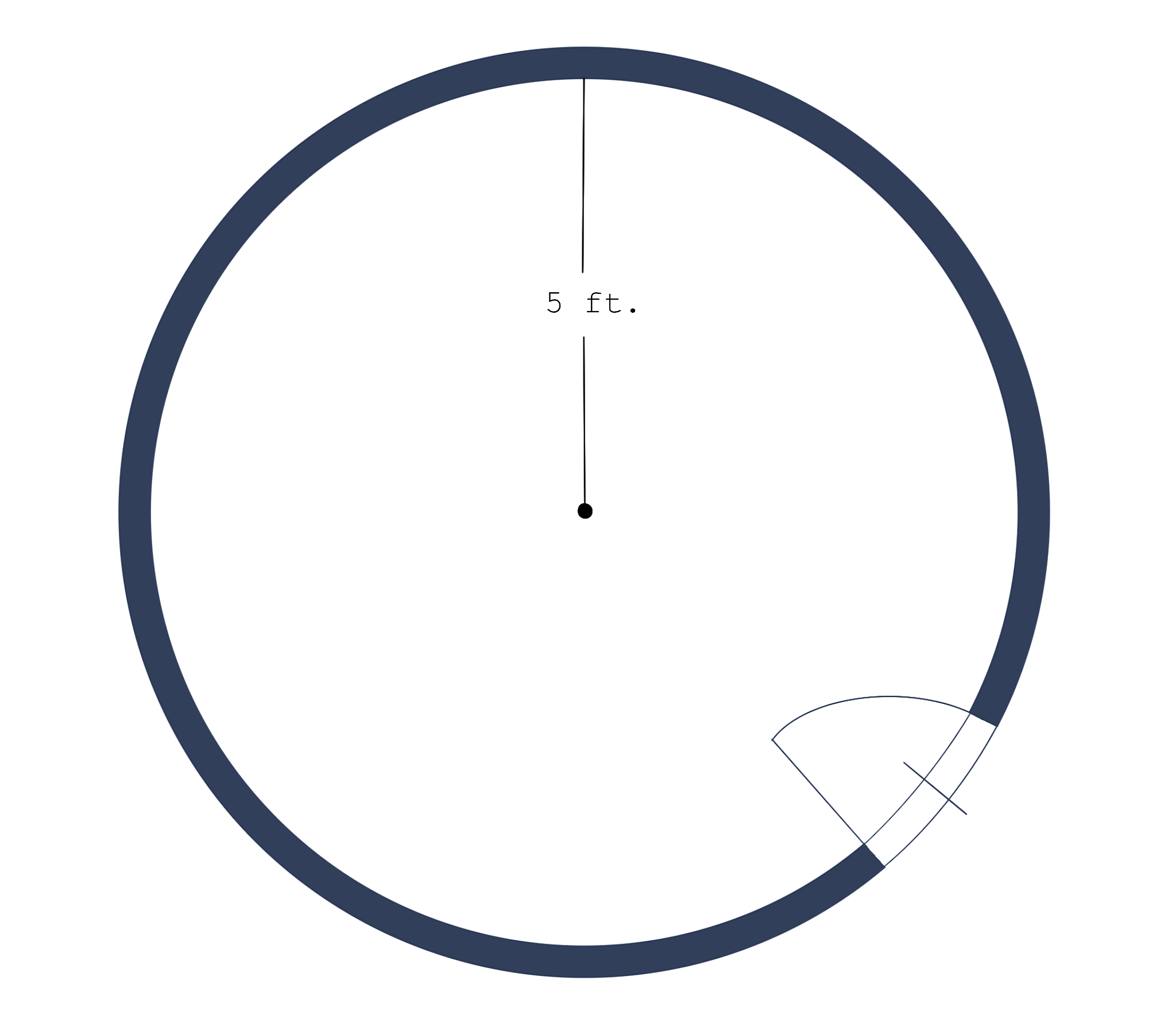 The first thing you need to do is find the radius of the room. To do that, simply measure from the center of the room to the wall. If you can’t find the center, measure the diameter of the room (i.e., the furthest distance between the walls) and divide it by two.

In our above example, the radius is five meters. So, we square the five — which simply means multiplying five by itself — and get 25.

The answer is 78.5. Since we round to the nearest whole foot when calculating the area of a house, we’ll say that the area of the room is 79 sq/ft.

You may also wonder how square footage is calculated or used within a homeowner’s insurance policy. We reached out to Scott Teece, managing producer at Edina Realty Insurance, to get the details.

“When offering coverage to a homeowner, we calculate the total replacement cost of the property,” explains Teece. “Both above ground and below ground square footage are factored into that calculation, but the cost to replace the above ground square footage is typically somewhat higher. That’s because, for example, if a catastrophic event like a tornado or fire should occur, you’d likely have to reframe the first floor and above, but not the basement.”

In other words, a 2,000-square foot house without a basement would likely have a higher replacement cost than a home with 1,000 square feet of above-ground living space and a basement sized at 1,000 finished square feet.

Have additional questions? Contact the team at Edina Realty Insurance for more information or a personalized quote.

Is a porch included in a home’s square footage?

If a porch isn’t heated or only has screens (with no glass windows), then it is not part of the finished square footage count.

Does a basement count as square footage?

As a general rule of thumb, basements usually do not count towards the square footage of a house. For a basement to increase a home’s square footage, it must meet certain criteria to be considered livable space, and such criteria can vary between states. Your local county assessor’s office determines whether appraisers can choose what is considered square footage towards a home’s Gross Living Area. Below we highlight some of the most common criteria a basement may have to meet to be included in your home’s total square footage.

Get in touch with a real estate agent or appraiser to best understand if your basement can be counted towards the square footage of your home.

What Is Included In The Square Footage?

In measuring the square footage of a house, it is crucial to know what can and can’t be included in the calculations. Not every foot of your home enclosed by walls will count towards total square footage. Instead, you are trying to determine the gross living area — or the livable parts of your home. Keep reading to learn more about the specifications for measuring square footage:

There is one measurement far too many inexperienced “appraisers” forget about: ceiling height. That’s not to say you measure the area as a three-dimensional space, but rather that the ceiling is one of the criteria I already alluded to. You see, for an area’s square footage to count in the home’s overall square footage, the ceiling above it must be a certain height. According to ANSI’s American National Standard For Single-Family Residential Buildings, finished areas must have a ceiling height of at least seven feet, “except under beams, ducts, and other obstructions where the height maybe six feet and four inches.” On the other hand, Angled ceilings must rest at the previously discussed seven feet for at least half of the room’s total floor area. If the ceiling is at least seven feet for at least half of the room’s floor area, total square foot calculations should include every area where the ceiling is at least five feet tall.

Basements do not typically count towards a home’s gross living area regardless of whether they are finished. Since they are below the rest of the home, basements can’t be included in the total square footage. That said, homeowners may note the size of a finished basement in a respective listing elsewhere. On the other hand, attics may be counted in a home’s total square footage if they are finished and meet the height requirements stated above.

Covered, enclosed porches may be included in a home’s gross living area if they are finished, and they are heated using the same system as the rest of the house. 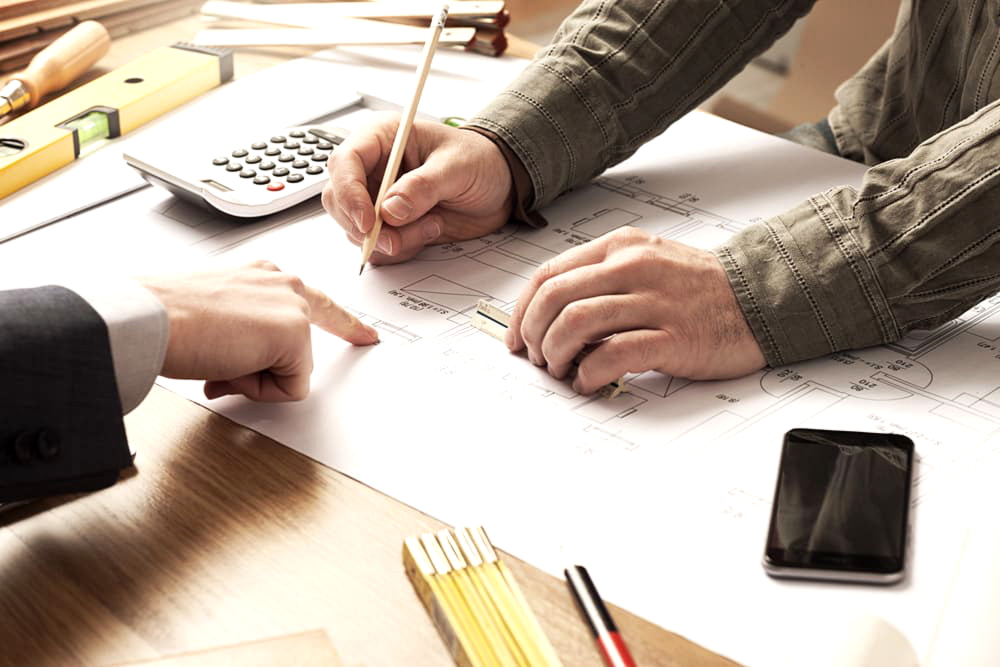 How is square footage measured?

To calculate square feet you multiple the room’s length by its width. For example, a space that measures 10 feet by 10 feet totals out to 100 square feet.

While this may sound simple enough, it can be complicated measuring the square footage of a house due to odd-shaped spaces and living space gray areas.

“For example, if a square house measured 20-foot by 20-foot when measuring to the interior walls, and the walls were 0.4-foot thick, then to calculate the area, you’d need to multiply 20.8 by 20.8 to find the exact square footage.”

However, if you’re selling a condo in a multi-family unit — meaning that you only own the interior space, not the exterior building — you would only measure square footage from interior wall to interior wall.

So if your home is 2,000 square feet, and you have an additional 1,000 square-foot finished basement, you cannot claim to have a 3,000 square-foot home if your local area values basement spaces at a lower dollar amount than the rest of the house.

In this instance, you would list your home at 2,000 square feet and then include the additional 1,000 square feet of living space in your finished basement in the listing notes.

The same is true of finished attic spaces. If the space has sloping roofs, inadequate windows, and forms of egress, then the area may not count towards your overall square footage.

To determine if your space makes the cut, consult an appraiser or an experienced real estate agent.

Here are few things to consider when preparing to measure the square footage or a property:

Enter your zip code to see if Clever has a partner agent in your area.

If you don't love your Clever partner agent, you can request to meet with another, or shake hands and go a different direction. We offer this because we're confident you're going to love working with a Clever Partner Agent.